This weekend, we hiked at Lake Leatherwood in Eureka Springs.  This trail has been on my list for quite a while, having read about it in Tim Ernst’s Arkansas Hiking Trails.  There are several trails around Lake Leatherwood, which is a municipal park in Eureka Springs.  Thinking of most city parks, images of a true ‘hike’ are not what come to mind, which is probably why this wasn’t one of the top trips on our list.  We were surprised to find a really nice hiking trail around a very scenic lake.

The weather was great with blue skies and sunshine, which have been missed lately given all of the rain in the area.  Yesterday was a rainy day, so things were a bit soggy, but we were not deterred.  Since dogs are allowed on these trails (leashed of course), Buster and Katie were able to accompany us.  It’s been a few weeks since they’ve gotten to go on a hike, and they were very excited.

Lake Leatherwood is on the west side of Eureka Springs off of Highway 62, close to the ball fields.  The road into the park is a little rough, but it would still qualify as paved.  Several trails cross the road and there were mountain bikers riding on it, so taking it slow is advised anyway.  When we drove to the campgrounds we took a right and went past the visitor center into the lower campground area by a meadow.  The trail maps are available at the visitor center, or can be downloaded from the Eureka Springs Parks and Recreation Commission. 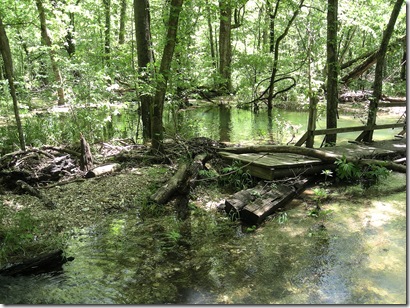 We opted to start at the Meadow Trailhead and take the Beacham Trail south around the lake then head north toward the dam.  It didn’t take long before we encountered a bit of a hiking challenge.  With the rains and the high drainage levels, the footbridge across Leatherwood Creed had been washed out. The creek wasn’t too deep, so we all splashed through to the gravel bench that the bridge (and lots of tree limbs) were washed to.  There was a bicycle leaning up on the bridge, so I figured some kid was able to cross the creek, we should be able to as well.  It turned out to be a bridge to nowhere, as the next section of creek was obviously deeper.  Given the challenges we had with Buster crossing Lee Creek on the Butterfield Loop, things did not look promising.  Stuart wasn’t too keen on crossing the creek either.  I was not one to be deterred, however!  The plan was to hike this trail, and I was ready to build a bridge with the tree limbs laying around.  I was not getting much assistance, since both dogs and the husband were herding the opposite direction, so I tried another tactic.  Convinced this was not a barrier, I started switching to my water socks.

Stuart took the plunge first and found the log that looked like it would be a good stepping stone was not on level ground and sunk down almost to his waist.  At this point, there wasn’t much point in turning back.  I headed after him and we got to the other side…minus the dogs.  I dumped my back and headed back across to coax the puppies into doggie paddling.  With a pocket full of cookies, I used my most encouraging voice, but neither dog was going for it.  Finally, I picked up the very wet and muddy Buster and carried him across.  When I went back for Katie, she was having no part of it, and started to run off.

Since there was water at the other end too, she didn’t make it very far, so I scooped her up and we were headed across the creek again.  Once we were at the other side, she spent a while looking longingly back up the trail.  I can only imagine she was thinking we should be getting back to the car.

The next bridge was intact, and we were on our way once again.  The trail is mostly level and well marked and maintained.  There was a bit of a climb out of the Leatherwood Creek, 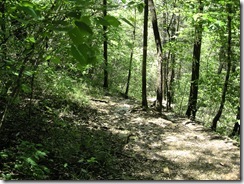 probably less that 100 foot elevation change.  The trail travels along fairly level for a while and follows the shoreline of the lake.  There were a few boaters and canoers out enjoying the sunshine that were visible occasionally through the trees.  Eventually, it started heading downhill to another creek, this one not nearly as deep.  We splashed through uneventfully and came to a fork in the trail where the Hyde Hollow trail heads south away from the lake.  We stayed on the Beacham trail and started heading north.  The trail headed up the creek we just crossed and I could see where it fed into Lake Leatherwood.  The trail follows the lakeshore, with some nice views of the lake. 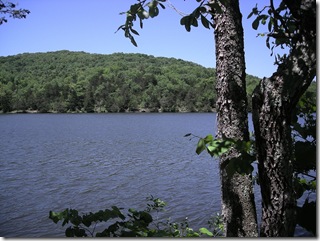 There were a couple of more streams to cross, one of them deep enough that Katie had to swim for it.  Both dogs apparently overcame their fear of running water, and made it through without much hesitation.  The trail started to head up a small hill and came out to a quarry about a mile after the fork in the trail.

This was the site where the limestone for the dam on the north side of the lake came from.   It was an interesting area to check out because there were blocks of limestone still around that had been cut from the quarry.  There was also a lot of water that had pooled in various places.  I guess it had been there a while because one of the pools was full of tadpoles. 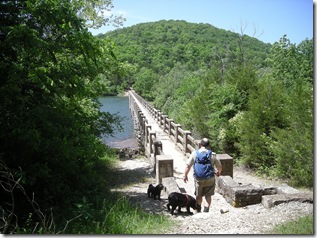 Shortly after leaving the quarry, we came to the dam.  At the time it was built, it was the largest cut limestone dam in the world.  It was pretty impressive and with the high water, there was a lot of water flowing over into the creek below. 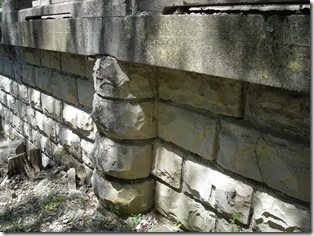 On the other side of the dam, there is a path to go down and view the falls from the bottom of the dam, but there were other people about and we opted to keep hiking down the trail.  I did snap a picture of the falls from the top of the dam, which is kind of disorienting if you don’t know that it was taken from the top and looking down.  I liked this picture though, because you can see the shadow of the railing from the bridge and of me taking the picture.  (I don’t actually get into many of the pictures on this blog, so I guess this is my way of getting my picture in.) 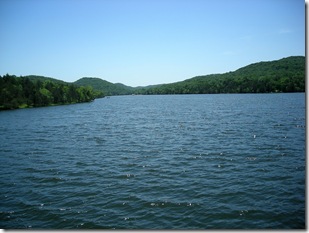 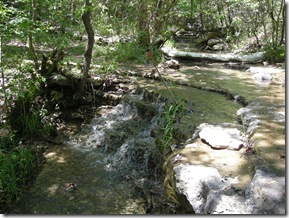 Shortly after crossing the dam, there is a fork in the trail.  We took the left fork and followed Fuller Trail along the lake.  It was a little muddier and we probably should’ve opted for the higher ground, but after crossing several creeks, we were all pretty muddy anyway so it really didn’t matter.  There were several small creeks and some pretty

little waterfalls along this section of the trail which made it interesting.  The Fuller Trail has a branch that is the Fishing Trail and there was a couple trying to catch a few on the lakeside.  We tiptoed past, to avoid scaring the fish.  I looked back at the sign showing the fork in the road and there was a nice little note mentioning that the bridge at the other end of the Beacham Trail was washed out and recommended turning around at the dam.  Hopefully, anyone hiking the other direction will take note or be ready for a wet crossing.  Not long after this, we were back to the main campsite.  The total hike was almost 4 miles, which we did in about 2 1/2 hours.  Even though it was a humid day, and a little warm, the trail was shady and there was a cool breeze coming in from the lake, which made it a pleasant walk through the woods.

This entry was posted in Hiking. Bookmark the permalink.